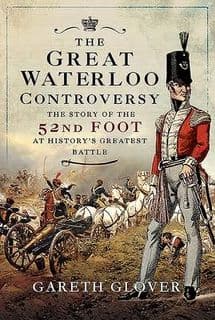 The Great Waterloo Controversy, The Story of the 52nd Foot at history's greatest battle by Gareth Glover

As the Battle of Waterloo reached its momentous climax, Napoleon's Imperial Guard marched towards the Duke of Wellington's thinning red line. The Imperial Guard had never tasted defeat and nothing, it seemed, could stop it smashing through the British ranks. But it was the Imperial Guard that was sent reeling back in disorder, its columns ravaged by the steady volleys of the British infantry.

The credit for defeating the Imperial Guard went to the 1st Foot Guards, which was consequently honored for its actions by being renamed the Grenadier Guards. The story did not stop there, however, as the 52nd Foot also contributed to the defeat of the Imperial Guard yet received no comparable recognition.

The controversy of which corps deserved the credit for defeating the Imperial Guard has continued down the decades and has rightly become a highly contentious subject over which much ink has been spilled. But now, thanks to the uncovering of the previously unpublished journal of Charles Holman of the 52nd Foot, Gareth Glover is able to piece together the exact sequence of events in those final, fatal moments of the great battle.

Along with numerous other firsthand accounts, Gareth Glover has been able to understand the most likely sequence of events, the reaction to these events immediately after the battle and how it was seen within the army in the days after the victory. Who did Wellington honor at the time? How did the Foot Guards gain much of the credit in London? Was there an establishment cover-up? Were the 52nd robbed of their glory? Do the recent much-publicized arguments stand up to impartial scrutiny? The Great Waterloo Controversy is the definitive answer to these questions and will finally end this centuries-old conundrum.