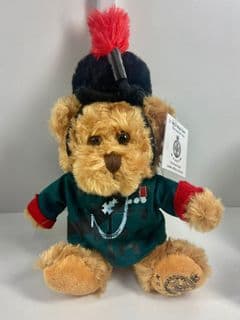 The label with the bear reads: "Bugle Major is the name given to the leader of the band of the past and present rifle regiments. His role is to control the music tempo and marching pace while conducting the band. He does this by marching at the front of the band and with the use of a mace that he carries by his side. Buglers are trained to play the bugle at a fast march of 140 paces per minute. The Bugle Major will start a march by conducting the buglers to play a call setting the fast pace for the drum and other members of the band to follow."